Gold price to return to $2,000 in just a couple of months – Standard Chartered

Sun shines on silver, which sizzles on solar panel demand

It’s getting harder with every passing day to find cheap assets.

Stocks, bonds, real estate, they’re all pretty pricey. And yet, no one seems to care.

Instead, the masses, and asset managers, appear determined to keep pushing them higher.

In recent days, the S&P 500, the Dow 30 and the Nasdaq all set new records. And yet, it’s not difficult to imagine that, at least over the next 6–12 months, these indices could easily all head higher.

It’s a classic melt up scenario. We have all the right ingredients in place. Even more big stimulus is likely on the way before long. Unemployment and home prices are stubbornly high, while real interest rates remain firmly negative.

But through all of this precious metals, and silver in particular, look irresistibly cheap.

I have to say, I can hardly blame investors for pushing asset prices higher.

After all the two feds, the Federal Reserve and the federal government, are a determined bunch. It’s easy to see why.

Some important relief programs expired this past summer, including a $600 top up for unemployment benefits and a loan program for small businesses. The $1,200 stimulus checks are feeling like a distant memory. And other temporary aid will end this year.

And unemployment is persistently high, particularly for those in the lower-wage categories. November saw just 245,000 jobs added to the U.S. economy, versus the 610,000 in October. Since the start of the pandemic, the U.S. has lost nearly 10 million jobs.

Right now, Congress is working on a bipartisan program that could include an extension to unemployment benefits, and a possible second loan to small businesses stemming from the Paycheck Protection Program. So with the prospects for a lot more helicopter money ahead, Janet Yellen as the next Treasury Secretary must be dusting off her pilot’s license.

In the meantime, asset prices continue to soar as negative real rates abound. The S&amp;P/Case-Shiller U.S. National Home Price Index is 70% higher than it was in 2012. And real interest rates have been below 0% most of the time since late 2007. I expect that these trends to remain entrenched and even continue as we move forward.

In my view, as far as investment assets go, silver still remains amongst the most undervalued. But that’s unlikely to last. Let’s look at it from a few perspectives.

When compared to gold, the silver price has a lot of catching up to do. 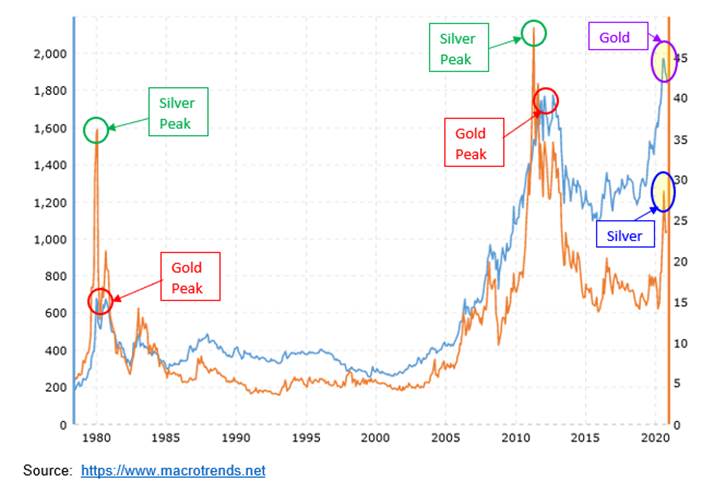 Notice that in both 1980 and 2011 silver’s percentage gains were markedly higher than gold’s, easily outpacing the yellow metal. And if you peer over to the right end of the chart, we can see that silver still has clearly a lot of catching up to do. 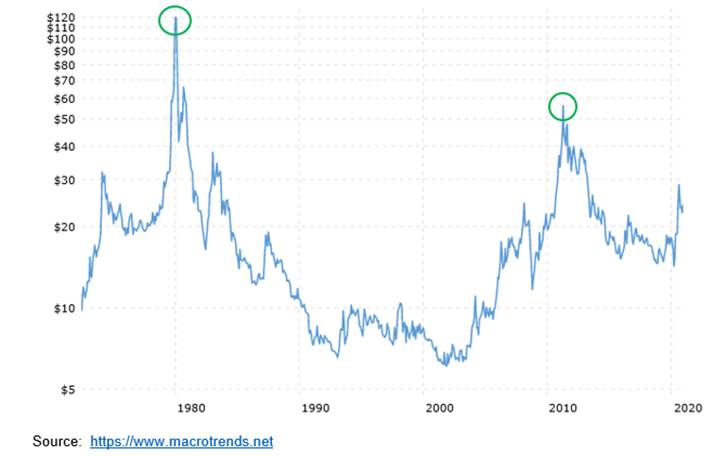 Note that when it topped in 2011, even when accounting for the low-balled consumer CPI, silver never even achieved half its adjusted 1980 peak. And right now at $24, it’s only one-fifth of those levels.

More recently, silver peaked at $29 in August, and has been on a four-month correction since. 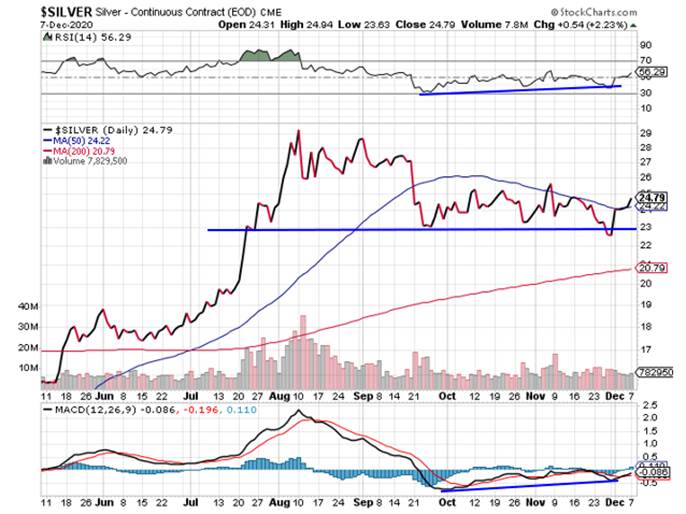 The price has mainly held above $23 after testing that level three times. The 50-day moving average has been flattening out, and silver has just popped back above that level. At the same time, both the RSI and MACD have been trending higher since silver’s first test of $23 in late September.

Looking at silver stocks, the overall picture is similar, if slightly less convincing. 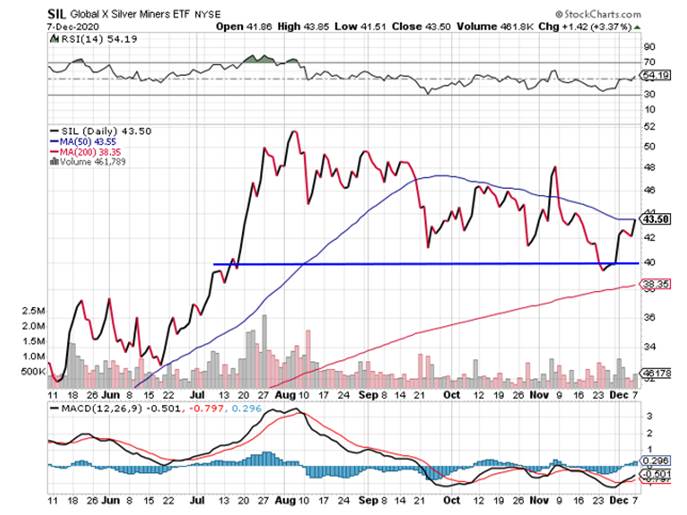 SIL has dipped lower to test its mid-July breakout at $40. And here too the RSI is trending higher, but the MACD put in a slightly lower low in late November. Meanwhile, the 50-day average has also flattened out and SIL is now challenging that level with room for momentum to push higher.

What to Do Next?

At this juncture, silver is looking pretty bullish. We could see it chop back and forth for another week, maybe two. But with the next Fed meeting on December 14–15, I think the setup is looking increasingly positive.

If you don’t own any silver, now looks like a great time to layer in, buying in regular intervals over the next weeks or month.

If you already own some silver or silver stocks, but feel like you need more, the same applies. Start buying, but split your allocation into a few tranches. That will help smooth out your purchase cost.

Just consider, of all the assets out there, silver looks amongst the cheapest by several metrics. And that helps mitigate risk, while diversifying your portfolio.

Caution: silver is heading into a massive bull market. Large gains, coupled with volatility, lie ahead.