Gold price to return to $2,000 in just a couple of months – Standard Chartered

Despite some short-term obstacles, gold will return to its peak of $2,000 an ounce in the next couple of months, according to Standard Chartered.

In November, gold was oversold, with prices falling well below $1,800 an ounce. November also saw the largest outflows of exchange-traded products (ETP) since November 2016.

“Provisional estimates imply net outflows of 112t in November. [This] suggest[s] that net redemptions were the largest since November 2016, the last U.S. election,” said Standard Chartered precious metals analyst Suki Cooper. “If outflows continue at the current pace, December would mark the second largest on record, only behind the outflows of April 2013.”

The steep fall in prices also suggests that the weak long positions have been flushed out, Cooper added.

What this means for gold is that despite some short-term resistance at certain levels, the precious metal is likely to return to $2,000 an ounce in the first quarter of next year, Cooper pointed out.

‘While fragile lower range-bound trading is likely in the near term, beyond near-term corrections, a weaker USD, negative real rates, concerns surrounding inflation, and expectations of further fiscal stimulus amid accommodative monetary policy are likely to keep gold price risk skewed to the upside,” Cooper wrote.

Vaccine rollout and economic recovery from the coronavirus is not likely to be felt until the second half of next year, which leaves upside potential for gold in the meantime.

“Vaccine rollout will allow for the resumption of travel and tourism, supporting economic recovery. We expect global GDP growth to bounce back to 4.8% in 2021 from a 3.8% contraction in 2020. We expect vaccines to receive regulatory approval in the coming weeks, with the rollout starting in early 2021. However, the positive growth impact is unlikely to be fully felt until H2-2021,” Cooper explained.

The market has interpreted the vaccine news as a return to normalcy. However, investors can’t forget about liquidity and debt levels, which are still supportive of gold, Cooper noted.

“The sizeable policy response in 2020 has also left the policy cupboard relatively bare going into 2021; this would leave policymakers with less room for maneuver in case of another shock. Longer-term, accommodative monetary policy and unprecedented fiscal stimulus bode well for gold prices,” she said.

“The gold market remains highly liquid in comparison to equities and bonds and has remained liquid through the recent price decline, but there has been a shift towards the OTC market; latest data suggests tactical short-covering,” she said. 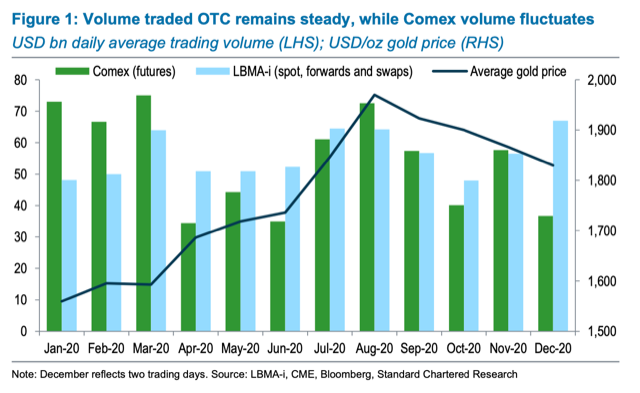