Why Does Gold Always Go Up in January?

Silver: The ‘Poorer Cousin’ That Might Do Better Than Gold

The gold price always goes up in January.

Or rather, gold has risen in each of the last nine New Years running.
Yes, every January since 2012 gold prices have ended the month higher than where they ended the old year.
A repeat next month will make it a remarkable 10 out of 10 for US Dollar gold prices.
It will also mark a stark contrast with gold’s more usual 52.1% strike rate across each and every month over the last decade.
What makes the gold price rise like this at New Year? 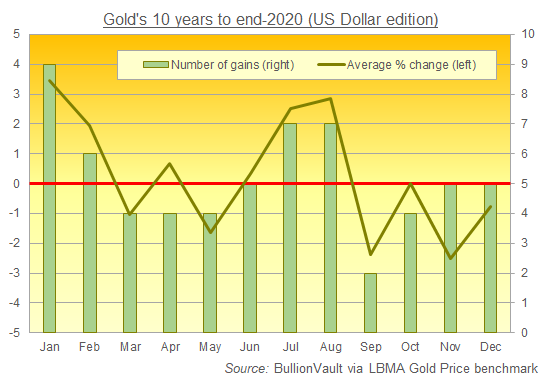 First, don’t blame December for January’s gains on the gold price charts.
Yes, the last month of the year shows a slightly negative average change in gold prices across the last decade, but that’s due to the horror show of December 2011-2013 (down 9.8%, 3.6% and then 4.1%). Gold priced in the Dollar still rose 5 times that month since 2011, including each of the last three years.
Second, don’t look to the Dollar itself. The greenback rose on the currency market in 4 of the last nine New Years, and that January performance pretty much maps the average performance of the Dollar’s trade-weighted index across all months since the start of 2012. It rose 46.7% of the time on a month-end basis.
More clearly, gold prices have also risen repeatedly at New Year in other currencies too, if not quite as consistently for UK and Eurozone investors as for US and Japanese Yen savers.
Gold prices rose 8 times in Sterling since 2012, seven in the Euro, and 9 in Japanese Yen, matching the performance in US Dollar terms across the last nine Januarys.
This is a global phenomenon, in other words. 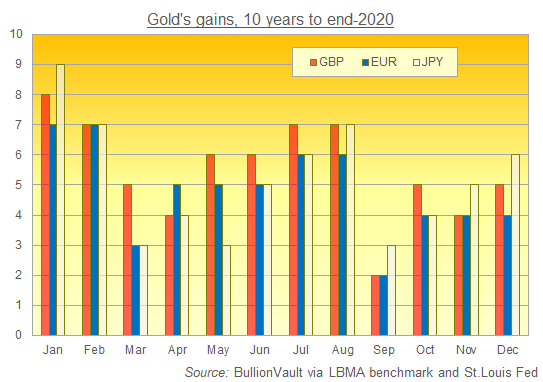 A stronger suspect might be interest rates.
The yield offered by US Treasury bonds fell in 7 of the last nine Januarys, reducing the opportunity cost of owning bullion (which pays no interest) instead of bonds (which used to pay more than inflation, or so my grandparents claimed). Across all months since 2012 in contrast, 10-year bond yields rose 53.3% of the time and 2-year yields rose 51.4% of the time.
So there’s something about January which makes bond yields fall as gold prices rise.
Stocks might help to explain this, because instead of rising 70.0% of the time – which is what the S&P500 index has done across each month in the last 9 years as a whole – the US stock market rose in only 5 of the last nine Januarys.
Relatively terrible, this New Year “weakness” in stocks maybe drove investors to seek an alternative to equities, whether government bonds or gold bullion. Or perhaps they were looking to diversify anyway, and simply took their prompt from the calendar, using the New Year to rebalance their portfolios and adding a little gold as a time-tested way of spreading risk. (You can check the outcome across recent years on our Annual Asset Performance tables here.)
2021 will certainly add a little extra gold to portfolios wanting to track the broader commodity markets. Thanks to its 2020 strength, gold will get the largest up-weighting of any commodity in S&P’s raw material index for next year, going from 4.1% to 6.3%.
On top of that, investors could once again find reasons to be fearful this New Year – and gold investing tends to rise on bad news.
Maybe it’s just a hangover from too much Christmas spirit, but a blizzard of bearish and gloomy headlines has greeted each and every January of the last decade, none scarier than at finance-traders’ favorites Bloomberg and the Financial Times. China in particular had long topped the list of worries prior to 2020’s virus crisis, most usually through forecasts that “Debt defaults threaten global crash!” copied from The Terminal and FT and pasted all across ZeroHedge.
But it’s here – China – that the hope of gold making it 10 out of 10 this New Year might come unstuck. That’s because the No.1 gold consumer nation may very well have played a part in the run of nine January gains since 2012. 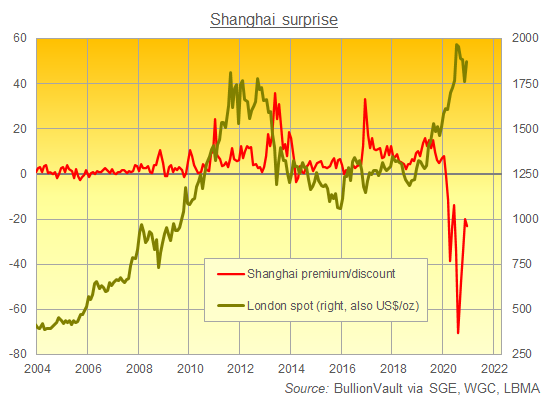 Since starting to decriminalize and then deregulate private gold trading at the turn of the millennium, China has become gold’s No.1 consumer, No.1 miner and No.1 importer too.
China’s big New Year holiday has also become the world’s No.1 gold-buying festival too. Falling in 2021 on Friday 12 February, the Chinese New Year has beaten India’s Diwali for almost a decade as the single heaviest period of private households demand.
To feed this world-beating shopping spree, all those bracelets, small bars, watches, ornaments and other gold gifts need making, shipping and displaying in time for the deluge of consumer purchases. That all starts with buying gold bullion in large wholesale bars, ready to melt down and re-cast into those consumer items. But not here in December 2020 it seems.
Our chart shows the gap between Shanghai gold prices and the global benchmark of London delivery. That’s because, while China is now the metal’s No.1 buyer, London remains the central storage and trading hub, and so its prices are the benchmark reference point for prices everywhere else. China’s gold price most typically shows a small premium to London, because the pull from household demand creates a cash incentive for new imports – out of UK vaults, onto a plane, and into China through the Shanghai Gold Exchange.
Because China continues to ban the export of bullion however, any glut of metal in its domestic market cannot get back into London. Instead, weak demand versus supply shows up as weak prices, most clearly as a discount in Shanghai relative to global quotes for London delivery – a discount which traders cannot exploit by shipping metal out to the UK, thanks to that export ban.
As our chart shows, the Shanghai premium has tended to mirror London price moves, rising when London fell and falling when the global benchmark rose. That’s just the kind of price sensitivity you would expect from consumer demand, rather than the chase-higher-run-lower financial flows which drive the gold price up or down.
As our chart also shows, discounts aren’t unknown. Most notably in 2014 for instance, China’s huge gold demand was more than met by its existing domestic supplies. There was no call on London stockpiles. But China gold has never before seen a discount anything like 2020, and that reflects the collapse in household demand begun by the Covid Crisis last January and now working its way through household spending by crushing income growth.
Most urgently for our topic today, the Shanghai discount is currently widening compared to last month’s average. This marks the first December since 2008 that China gold prices haven’t risen relative to London. That’s quite the change, because China’s huge gold gifting industry needs to get ready no matter what is happening to world prices. And for the last decade, that has always raised the incentive for traders to buy London and ship into China, tightening supplies here in the global trading hub and preceding a rise in global prices in each of the last nine Januarys.
The looming Chinese New Year of the Ox has so far failed to move Shanghai gold prices higher relative to London. Instead it has in fact made Shanghai gold prices weaker relative to London than they were last month, slipping towards a $25 discount per ounce. That contrasts with an average $11 per ounce premium over the previous nine Decembers (ranging from $3 at the end of 2014 to $33 in Dec’ 2016). And those nine Decembers – in which the premium always rose from November – preceded the run of nine winning New Years seen in global gold prices since 2012.
No, correlation isn’t causation. No, it won’t matter much if gold doesn’t rise in Dollar terms next month (there’s no relation between gold’s January performance and the rest of the year, and not for silver either, nor platinum. It’s ending 2020 flat for UK investors after snapping its 17-year run of winning Januarys.) And yes, there are lots of much better reasons to buy and hold gold this Christmas than trying to guess whether the metal will make it 10 out of 10 for New Year gains in January 2021.
But for short-term traders, and for investors trying to spot how the Covid-changed world might impact Covid-changed asset prices next year, the price of gold bullion currently lacks any support from Chinese New Year – the world’s No.1 gold-buying festival.
That leaves investment flows to make the running, just like across the rest of the year. And with government deficits surging worldwide as central banks squash interest down to and below zero, the case for owning a little indestructible rarity could hardly be clearer.
BullionVault – Wednesday, 12/23/2020 12:48