This is the time to buy gold, says Wells Fargo

Gold prices saw a $200 tumble in September, which Wells Fargo is viewing as a great buying opportunity during a well-expected correction.

“We’re buyers of gold,” Wells Fargo head of real asset strategy John LaForge wrote on Monday. “After a great seven-month run, gold cooled off in August and September. Gold spot prices today sits about $200 lower than its all-time high of $2,075, per ounce set in August.”

The strength of the U.S. dollar over the past few weeks has been the reason behind gold’s retreat, noted LaForge.

“We believe that this 10% pullback is partly due to froth and partly due to the U.S.  dollar,” he wrote. “From the froth perspective, gold’s 37% year-to-date rally through the August 7 high had been quite dramatic. It was warranted, but dramatic nonetheless.” 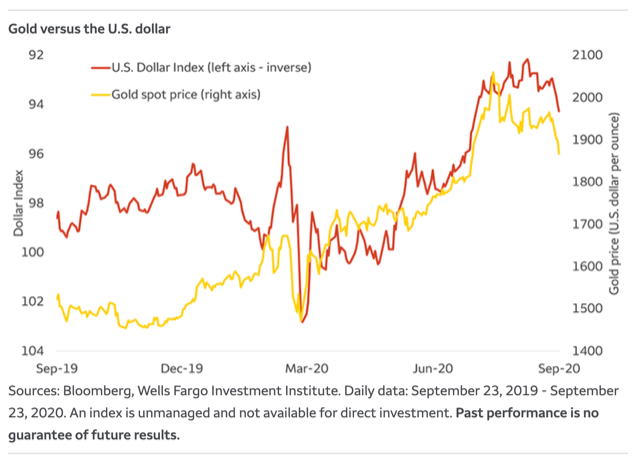 Gold’s correction was bound to happen after the 2011-high was breached and prices rose above $2,070 an ounce in August.

“Only five times since 1980 has gold seen 37%+ rallies in such a short amount of time. These types of rallies are hard to hold onto, and gold was due to cool off some,” LaForge explained.

Prior to September, the U.S. dollar was in a downtrend, which helped gold climb to its new record highs.

“Starting in early August, though, the U.S. dollar stopped moving lower. And in recent weeks, it has even started moving higher,” LaForge said.

However, Wells Fargo’s optimistic view on gold has not changed with the bank remaining bullish on the yellow metal.

“The fundamental backdrop looks good. Interest rates remain low, money supplies excessive (quantitative easing), and we are doubtful that the U.S. dollar’s September rally has long legs,” LaForge said. “We view gold at these prices as a good buying opportunity and, as evidenced by our 2021 year-end targets, expect higher gold prices.”

Back in July, Wells Fargo released its updated gold price forecasts, stating that gold could rise all the way up to $2,200 – $2,300 by the end of next year, which means there is still a lot of upside potential.