What To Look for When Looking for Gold

… the Fed’s latest obscuration of the money supply numbers is an indicator that the Fed’s printing press will go “Weimar” over the next 12-24 months. This will translate directly in soaring gold and silver prices.

The Federal Reserve quietly announced on December 17, 2020 that it is redefining the M1 and M2 Money Supply Measures (H.6 Release) by shifting the savings deposits component into M1 from M2.   M1 is supposed to measure “demand money” – i.e. funds that can be accessed for use without prior notice, primarily checking account funds, including travelers checks and free-floating currency.   M2 is M1 plus “term” deposits:  savings accounts, CD’s in amounts of less than $100k and retail money market funds.

This chart below, sourced from Alasdair Macleod’s must-read “The Next Dollar Problem Has Just Arrived,” shows the vertical move in the M1 aggregate since the end of 2019: 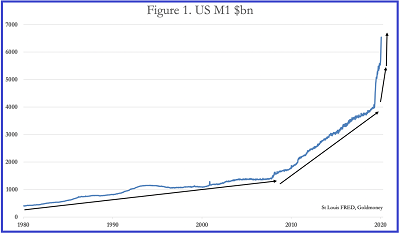 The graphic above was prepared before the Fed announced its redefinition of M1. The jump in M1 was primarily the result of a huge shift in funds from term/savings accounts into demand deposits. It’s a flight to safety of sorts in that depositors have shifted a unprecedented amount of funds from “term” deposits at banks into “demand” deposits. In a sense, it’s a low-grade “run on the banks.”

Nothing the Fed does happens by coincidence or merely on a whim. Recall that the Fed decided to no longer report the all-encompassing M3 monetary supply aggregate in 2006. The Fed’s stated reason for this was that it was not worth the expense involved with calculating and reporting M3 because the difference between M2 and M3 was primarily eurodollar deposits (not an insignificant quantity of money). The disingenuity of this excuse was palpable. The U.S. is the only major industrialized nation that hides the M3 calculation.

More likely, it was a move to hide the best measure of the money supply in preparation for the “QE” era. Many of us saw the banking system collapse unfolding well before 2006. As such, it’s clear – at least to me – that the Fed knew it would be forced to start inflating the money supply ahead of the actual event.

In that regard, the Fed has taken further steps to increase the opacity of the monetary aggregates. This is direct from the Fed’s website:  “Of particular note, the publication frequency of the release will change from weekly to monthly, and the release will contain only monthly average data.”  The Fed also will no longer publish non-M1/M2 account balances, like institutional money funds, which help enable the reconstruction of M3.

In addition to the reporting of the numbers monthly rather than weekly, the H.6 statistical release will provide components of the monetary aggregates only “at a total industry level without a breakdown of components by banks and thrifts.”  Well, guess what?  The breakdown by the bank and thrift components contains the data that truthseeking Fed analysts would like to see. The last weekly statistical release will be on February 11, 2021. And the data will be cleansed retroactive back to May 2020.  Again, no coincidence with the May 2020 retroactivity.

For perspective on this latest move by the Fed, recall that Jay Powell promised more transparency when he assumed the Fed’s helm.  Predictably, since Powell’s tenure began the Fed has taken measures to reduce the Fed’s transparency and accountability.