Michael Z. Yu, an independent analyst on precious metals, says relative to gold, silver has only been this undervalued on two other occasions in modern history: once during the Second World War, and then at the start of the 1990s. “So for those who think silver will revert to the mean, this is a great time to buy it,” he wrote in an advisory on Monday.

Hovering at under $18 an ounce, silver is not far off early June’s nine-month highs, and seems a better bet to some investors than gold, which has struggled to hit $1,800 since the start of the year.

While few doubt gold’s quality as an institutional safe haven, the crowded trade and range-bound pricing that’s become standard fare with this market is wearing many down. 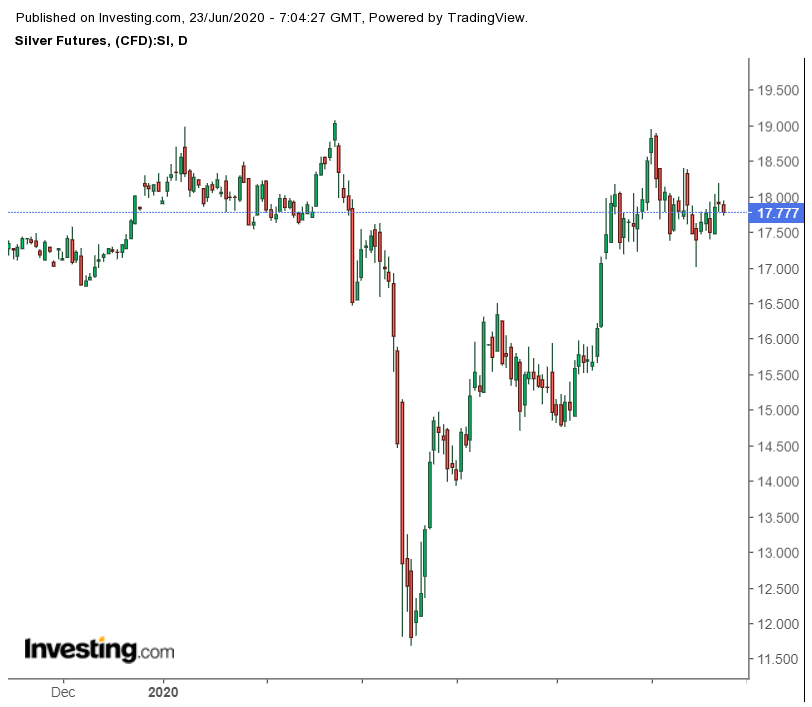 Silver, The Choice Of The “Active” Safe Haven Crowd

While some are content to be laissez-faire, or in defensive-mode, with their investments, others are actively looking for returns in the precious-metals space. Enter silver.

“Silver is, of course, the more volatile of the two precious metals, but nevertheless it often trades in relative tandem with gold.”

For an idea of just how volatile it can get, silver went from a marginal 0.5% gain in January to a combined drop of more than 22% between February and March, before recovering these losses, and then some, over April and May. So far this month, silver is down nearly 4%, leaving it 1.7% lower for the year.

For gold, and by extension silver, a key catalyst lately hasn’t been so much supply and demand, but uncertainties like the tensions between the United States and other countries such as North Korea, China and Iran. The huge economic impact of the coronavirus pandemic has been another major source of concern.

A Mixed Outlook For Silver So Far

As Yu argues, supply of world mine output will grow in the medium term, as operational improvements and expansions outweigh reserve depletion.

But the outlook for world recycling will be mixed, he says.

As for demand, increased production of hybrid and battery electric vehicles will have a higher silver loading than traditional internal combustion engines, Yu says.

While per-unit silver loading in photovoltaic cells will decrease, the volume of PV cells overall should increase, he adds.

Also promising for silver are other areas that require conductors, such as 5G technology. Use of silver for jewelry, silverware, coins and bars will remain steady, while photographic demand will continue to fall from an already diminished base amount.

Thus, raw supply/demand of silver will likely be balanced over the next few years, Yu concludes.

He presents his broader outlook in the three standard horizons:

“In the short term, there is room for the gold/silver ratio to fall, which would mean that either gold should fall, or silver should rise, or a combination of the two.”

“In the medium term, as reserves become depleted, and base metal mining decreases due to a world slowdown and deleveraging (silver is a byproduct of base metal mining), I would expect that supply should become restricted in the future.”

“In the long term, the increasing brittleness and partisanship in the US government should make fiscal missteps, such as extended government shutdowns and loss of confidence in the US dollar more likely.”

The latest World Silver Survey, published by the Silver Institute and Metals Focus, indicates that the silver market experienced an overall global supply increase in 2019, despite a 1% decrease in mine production. In 2020, mine production is expected to fall 5% to 797 million ounces, while overall supply is projected to drop by 4% to 978 million ounces. That would be the lowest level in world silver supply since 2009.

On the silver demand side, the electric vehicle and photovoltaic markets contributed greatly to increased consumption of the precious metal in 2019. “Photovoltaic demand registered an impressive 7% increase in offtake, rising to its second highest annual level,” the report said.

Last year, investor demand for silver recorded its highest increase since 2015, rising 12% to hit 186.1 million ounces. Holdings in exchange-traded products experienced their largest annual growth since 2010, up 13% to 728.9 million ounces.

For 2020, physical silver investment, such as silver bullion coins and silver bars, could see a third year of growth, rising 16% to 215 million ounces.

“Silver physical investment is forecast to extend its gains this year, with a projected 16%-rise to a five-year high, as investors rotate out of equities in search of safe-haven vehicles.”

“Many market watchers do believe that the price of silver is ripe for a rally.”