Gold’s price reached an 8-year high this week, and a Goldman Sachs projection sees the precious metal to continue rising in the next twelve months to $2,000 per troy ounce.

At the same time, famous gold-bug Peter Schiff believes its price could reach a new all-time high even before the end of the year, especially if President Trump loses the election.

While the giant multinational investment bank recently seemed somewhat pessimistic regarding Bitcoin’s role in the financial markets, its position on gold is just the opposite. The CNBC cited Goldman Sachs’s latest report on the bullion in which the bank’s analysts noted that debasement fears and a devaluating dollar will push its price further upwards.

Goldman’s previous forecast predicted that the precious metal will keep increasing during and even after the COVID-19 pandemic and will ultimately reach $1,800/toz in twelve months. Now, however, the analysts took it a step further by indicating that its price could climb to $1,800 in three months, $1,900 in six, and peak at $2,000 in a year from now. 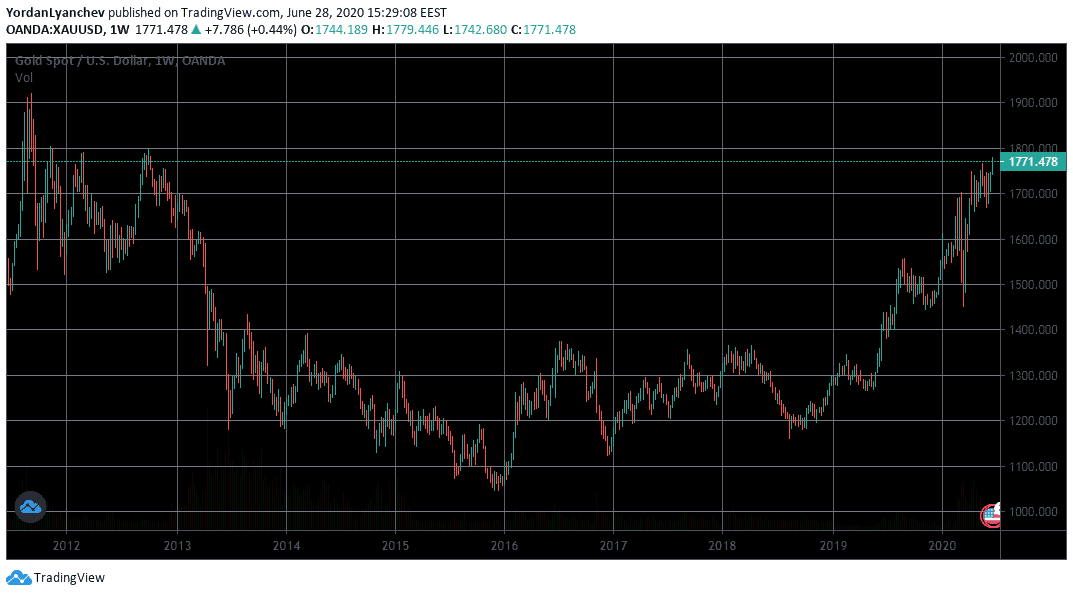 The pandemic undoubtedly affected gold and its distribution. The report noted that India’s precious metal imports plunged by 99%. Russia’s central bank ceased purchasing more after years of massive accumulation. Nevertheless, the year-to-date gold coin demand is up by 30%, and the total weight of gold in ETFs is up 20% year-on-year, Goldman said.

Aside from gold’s 8-year high price and rather impressive yearly gains so far, Schiff believes that the 2020 US Presidential elections will significantly impact the bullion market. Whether President Trump remains in office or Joe Biden replaces him, it’s unclear at the moment. However, the famous economist foresees gold breaking the $2,000 barrier “on election night,” if Trump loses.

The polls so far indicate that Biden is already the clear favorite with a substantial lead. If elected, such an outcome could push the stock market down as Biden pledged in December 2019 that he will reverse Trump’s signature tax cut legislation, which boosted corporate profits. Consequently, Wall Street executives have been preparing for this potential scenario, according to Forbes.

Gold, on the other hand, is typically regarded as a safe haven investment instrument that lacks a positive correlation with the equities market. Hence, if Biden succeeds and the traditional markets plunge, the precious metal could indeed receive a massive pump.