VanEck’s Joe Foster on Why They See Gold Surpassing $3,000

Valuation on a real-yield-adjusted basis

Our framework is based on our assessment that while many factors influence the price of gold, only one explains the majority of moves over the past decade: changes in the real (i.e., inflation-adjusted) yield of government bonds. As we’ve written previously, gold, by its nature, essentially has a real yield of zero – so just as currency movements are driven by real yield differentials, so should be the price of gold. (We refer to real rather than nominal yield because gold prices have historically tended to rise with U.S. inflation.)

Since about 2006, gold has traded like an asset with nearly 30 years’ real duration (meaning that a 100-basis-point move lower in U.S. Treasury real yields has translated to a roughly 30% increase in the price of gold). From a market perspective, as real yields on U.S. government bonds rise, one would expect investors to marginally prefer those assets, moving out of gold and into U.S. Treasuries and Treasury Inflation-Protected Securities (TIPS). Gold prices should drop in the process. Conversely, when Treasury real yields fall, gold prices would tend to climb.

The second was following the financial crisis, when investors became enamored with gold and how it had gone up every year for the preceding decade. Currently, gold trades at the lower end of the post-2004 band. We think it’s likely, however, that its real-yield-adjusted price could move higher within that band, as gold’s recent strong performance attracts more interest in the market, similar to what occurred following the 2008 financial crisis.

Despite the recent run-up in gold prices, we believe gold remains attractively valued – one might even say cheap – in the context of historically low real interest rates. The key risk is that real interest rates rise, making gold relatively less attractive. At current valuations, however, there is some cushion against this view, with the real-yield-adjusted gold price at the lower end of its range for the last 15 years. Our base case is that rates remain relatively range-bound; this outlook, combined with our view that momentum and interest in gold causes the real-yield-adjusted gold price to move higher, points to gold still having more upside from here. 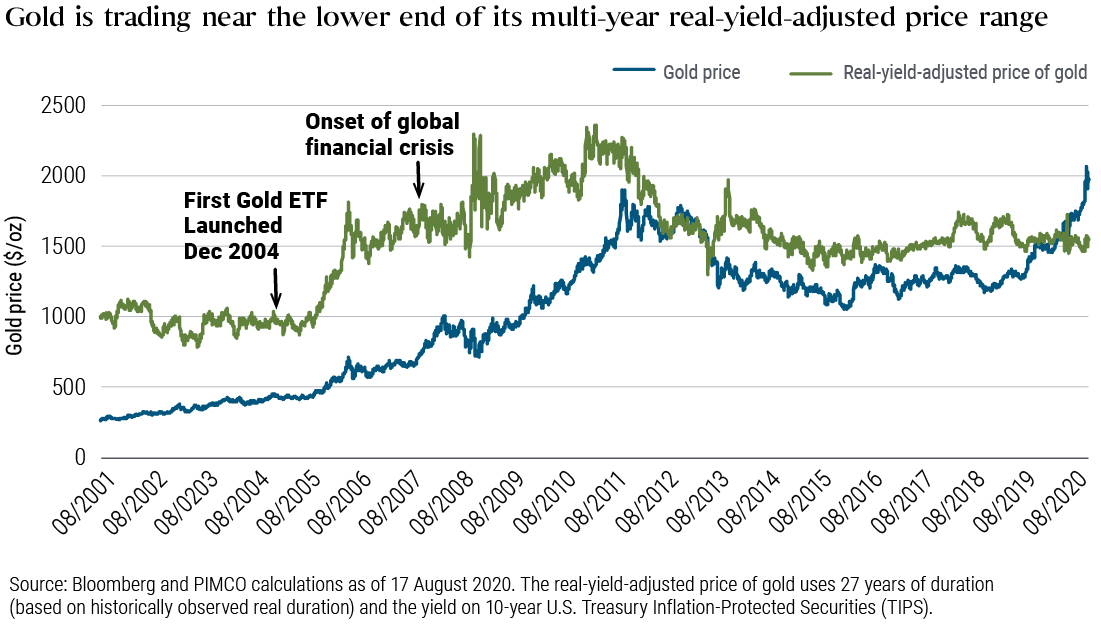